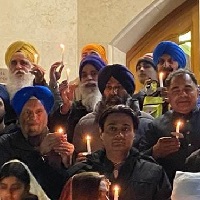 A candlelight vigil was held at the Southall Gurdwara in West London in remembrance of Indian State terror victims from 1984 to the present day.

The following statement was issued by the Gurdwara Sri Guru Singh Sabha Southall.

Members of the Congregation and Executive Committee at Gurdwara Sri Guru Singh Sabha Southall hosted a candlelight vigil on Saturday evening at the Havelock Road institution in West London in remembrance of Indian State terror victims from 1984 to the present day.

The vigil was organised in the wake of the recent pogrom orchestrated against members of the Muslim community in Delhi where hundreds of Indian citizens were beaten, lynched and even burnt alive.

Since obtaining statehood from the British Empire in 1947, the Indian State has on numerous occasions indulged in divisive politics and violence for the purpose of electoral gains. On each occasion a broad formula can be observed whereby a minority group is demonised to create a climate of hostility, dehumanisation and eventually indifference to their plight from amongst the majority vote bank; this is then followed by State sponsored violence.

This was most evident in 1984 and described by the former Indian Home Secretary Sri Rajnath Singh as a ‘Genocide’ against the Sikhs. In 2020, this same formula has emerged, with members of the Muslim community the victims.

This pogrom was being instigated despite the high-profile visit of US President Donald Trump to India. Accordingly, minorities of Indian origin in the United Kingdom and across the World are disappointed with President Trump’s silence on the matter, as well as the general apathy shown by western nations to this tragic happening.

Sri Guru Singh Sabha Southall calls on India to halt the politics of hate and adopt an inclusive approach to governance which might better allow the rich religious and cultural diversity of the sub-continent to flourish.

The Sabha calls on the United Kingdom and western nations to help protect the values of religious freedom, human rights and the rule of law in the sub-continent, making an unequivocal condemnation of the violence perpetrated recently in Delhi.

The candlelight vigil was attended by members of the Sikh, Muslim and Mulnivasi communities. Notable attendees included: